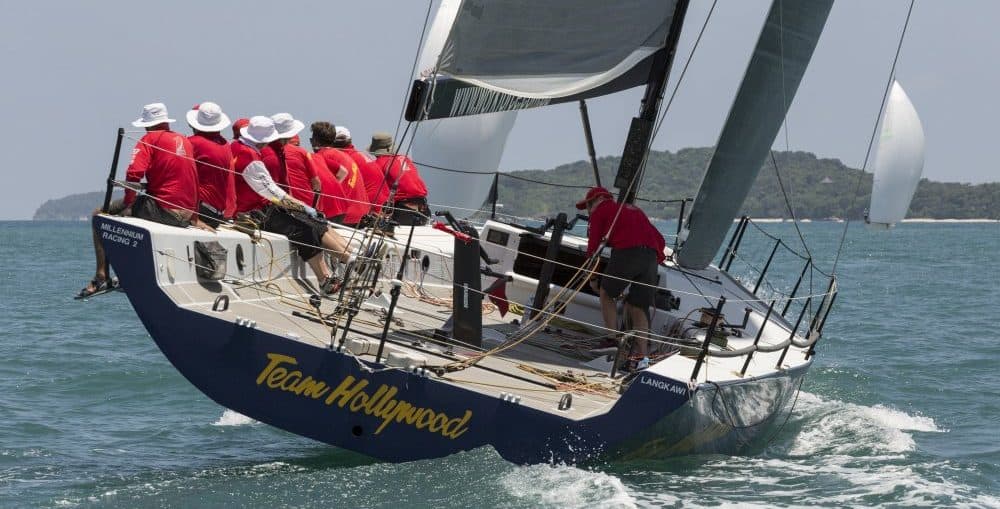 Sailing in Phuket is a leisurely activity for most, yet for a select group of sailors it’s a staging ground for some fierce competition. Every July, sailors from around the world arrive to Phuket to take part in the Cape Panwa Hotel Phuket Raceweek, an annual event that’s celebrating its 15th year in 2018.

The 2018 race is running from 18 to 22 July at Cape Panwa Hotel Phuket and Kantary Bay Hotel Phuket. Some 40 sailing teams are expected to join the regatta, while Cape Panwa Hotel’s beachside bar will host nightly parties. Non-sailors can buy tickets to the parties if they want to mingle with the yachting crowd – gate-crashers are not welcome! Party tickets are 1,000 baht to 2,000 baht for a single night or 5,000 baht for entry to all four party nights.

Previous years have seen some thrilling sailing action, with the ‘green season’ weather conditions adding some extra excitement and variability.

Registration is from 10am to 4pm on 18 July, with all daily racing off Phuket’s east coast of Phuket starting at 10am from 19 to 22 July.

15 YEARS STRONG ARE YOU COMING?

Indeed 15 Years Strong and a lot can happen in 14 years. 493 boats and more than 2,500 sailors have taken part in Cape Panwa Hotel Phuket Raceweek since its inception in 2004 and as the organisers look to the event’s 15th year the signs are good.

Entry Update
Cape Panwa Hotel Phuket Raceweek has built a reputation for competitive racing across all classes and the growth in number and calibre of the 40-footers looks set to continue with entries already being received, the latest being the Farr 40 Prime Factor who will be competing for their first time at Phuket Raceweek.

Sail Boats in Phuket
IRC Racing II class is hotting up with Phoenix already registered and back to defend their title. While tough to beat, it’s not impossible as the Sailescapes Farrgo Ladies team proved last year beating Phoenix in Race 2 of the series. The Australian-Phuket all ladies team are another early register and are looking to better their second place overall last year but will first have to overcome another ladies team from Australia who have chartered a near identical Farr 1104, Krabi Boat Lagoon Pinocchio, and will be making their first appearance at the regatta.

Multihull sail boat ‘Twister’
Multihulls are also signing up in numbers. Five one design Corsair Pulse 600’s are chartered to international crews and a new Stealth from Asia Catamarans’ yard is believed to be joining the catamarans and trimarans in Multihull Racing. Also competing for the first time is the built-for-speed all-carbon Fugazi, while the Firefly 850 Sports One Design class looks set to exceed last year in size

15 Years Strong and looking to grow cruising classes.
Introduced last year for the first time was the Multihull Cruising class and with entries already received this class is one we aim to grow in the coming editions of Phuket Raceweek.

There are many cruising multihulls and mono’s in the Phuket waters and we are keen on our 15 years strong theme to invite owners and crews to come and join in.

New for 2018
Phuket is no stranger to the Platus – a 25-foot Farr-designed monohull that was originally commissioned by a group of Thai businessmen for racing in Thai waters. The island has been home to Platus since their early years and they’ll be returning after a one-year hiatus as a dedicated one-design Platu class – The ABSOLUTE Platu One Design class.

Open to all one-design Platus that are willing to race with identical sails provided by the class representative, Phuket Raceweek will be the penultimate regatta in the four-event Platu Championship of Thailand which will see an overall series winner crowned at the Platu Cup held in October in Pattaya.

2 thoughts on “Phuket Raceweek – Battle at Sea for Yachting Glory”