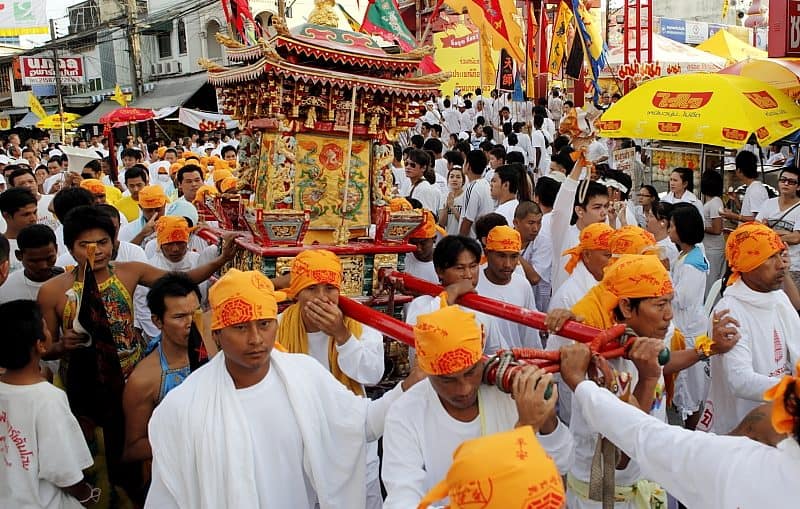 The Phuket Vegetarian Festival is one of the most important events in Phuket, with thousands of devotees taking part and probably an equal number of curious onlookers and photographers. It happens every year in the ninth month of the Chinese Lunar calendar.

The 2019 Phuket Vegetarian Festival will be held from September 28 to October 7.

The festival has a long history and many of the things that happen during it are completely bewildering to those not familiar with Chinese-Thai Phuket culture. It’s an intense and sacred event that holds a lot of spiritual meaning for those who join it, so I urge anyone planning to go to learn a bit about it before turning up at a parade or shrine ceremony. Some activities are shocking, so be prepared!

Here are some key things to know about the Phuket Vegetarian Festival:

Some of the Phuket Vegetarian Festival ceremonies are gory and hard to watch. If you think you can stomach seeing men (and some women) with swords, chains, rose stems, rebar and all sorts of sharp implements jammed through their cheeks, then, by all means, go see it, but you have been warned! Other brutal ceremonial acts I’ve seen include climbing ladders of blades, walking over hot coals, whipping the back with ropes dipped in boiling oil, and slashing at the tongue with an . The video below gives a teaser of what to expect – warning disturbing images!

2. It’s Been Celebrated in Phuket for Nearly 200 Years.

During the height of Phuket’s tin mining boom in the 1800s, the island attracted a lot of Chinese migrant workers, many of whom settled in Phuket Town and Kathu, the valley between Phuket Town and Patong Beach. Among those who came was a troupe of Chinese opera performers in about 1825. During their visit, some of the group fell seriously ill. To restore their health, they purified their bodies by refraining from eating meat and praying to the Nine Emperor Gods for nine days and nine nights. Soon after, everyone made a miraculous recovery and to thank the Emperor Gods they held a festival in the Gods’ . Since then, Phuket people have held a festival nearly every year at several shrines around the island.

3. So Who are These Nine Emperor Gods?

The beliefs behind the festival are of Taoist origin, honouring the nine heavenly gods called “Kiu Ong”. Chinese communities across Southeast Asia hold Nine Emperor Gods festivals but it’s only in Phuket (and a few other places in Southern Thailand) where the celebration includes extreme self-mortification. These celestial gods are believed to help protect people’s health, prolong life and help the community remain safe and prosperous.

Among those who join the festival, the Spirit Mediums, called “Ma Song”, are the ones you see in all the graphic photos and videos. Ma Song means “horse of the gods”, as they are believed to carry the gods’ essence as a horse would carry a rider.

As they become entranced by the Emperor Gods, the Ma Song become a sort of receptacle that absorbs bad luck and evils in society to bring about better fortunes. When in a trance, their eyes roll back in their head and they’re said to feel no pain when getting their faces pierced or doing one of those scary-to-watch festival acts mentioned above. It’s a way for them to make merit and improve their standing in the community.

How does one become a Ma Song? According to those I’ve talked to about it, some Ma Song take on the role willingly as a way to revive and extend their lives. Others are chosen by the Gods for their “moral qualities” – they have no say in the matter.

I once heard a story by one former Ma Song, now elderly, who said he’d become one at a young age. One year he decided wanted to skip the festival, going instead to see a movie with a girlfriend. He didn’t remember what happened but when he next became conscious he found he was at one of the Chinese temples, coming out of a trance. His girlfriend later told him he’d suddenly stood up and ran out of the theatre in the middle of the film. A chosen one.

This article gives some fascinating insight into what it means to be a vessel of the gods: Interview with a Spirit Medium of the Vegetarian Festival.

As the festival dates near, you’ll start to see a lot of yellow and red flags put up along the streets near the shrines, and soon enough a bunch of vendors set up tables selling vegetarian food. Many restaurants around the island change their menus to be 100% vegetarian during the nine days, and some hotels will put on special vegetarian meals in celebration of the festival. Inside every you’ll see a team of volunteers bringing in or preparing vegetarian dishes, which are given away for free. Visitors are welcome to the free food, too, but don’t be a cheeky glutton about it – give a donation to the temple if you can.

During the nine days of the festival, people who take part must follow these rules:

7. Pregnant or Menstruating Women Must Not Attend.

This is another festival rule. I’ve never been told a clear reason why.

Another rule is to dress from head-to-toe in white, as a way to show your dedication to purifying the body and mind. Handily, many local shops display white festival clothing for sale in the weeks and days before the start of the festival, including the big hypermarket Tescos!

9. The Processions are Loud, Smoky and Surreal.

Some advice for those going to any of the processions: bring earplugs. In addition to the skewered cheeks, the Ma Song must endure having thousands of firecrackers hurled at them as they walk barefoot through the streets in a procession. Most of the parades are in the early morning, while the final one is at night (on October 17 in 2018). For the last procession, worshippers from all the shrines make their way through Phuket Town to the seaside at Saphan Hin park where the Gods are bid farewell in spectacular fashion.

I’ve only gone to this final procession once, and I’ll never forget it. It was like entering a war zone, where the air quickly filled with acrid smoke and the constant crack-crack-boom of the firecrackers. It’s mystifying, joyful and alarming all at once. I’ve seen friends go to this parade dressed up like they’re bio-hazard workers entering a nuclear site, with safety goggles, face masks, and all-white clothing. As I mentioned, it’s intense!

*A wee note to say that none of the photos in the post are mine – credits given in the captions. I have some pictures from previous events but they’re all crap! It’s either raining heavily or I’m too absorbed in the event to bother trying to take good photos. (The top photo is by Roberto from Venice, Italy, via Wikimedia Commons.)

Blogger Grrrltraveler has a good Quick Guide to the Vegetarian Festival, with some stunning photos and video.

My friend Willy at the Phuket101 blog always has great photos of the festival (and everything else in Phuket!). Here’s his latest post about it: Phuket Vegetarian Festival.

The Phuket Vegetarian Festival Facebook page posts updates and schedules of the event (mostly in Thai).